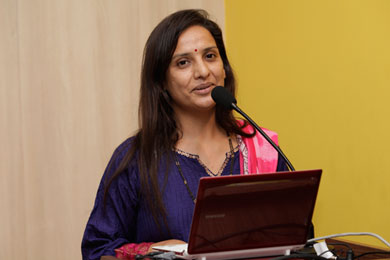 Nikita worked in different capacities as a Journalist, Lecturer and Social Worker before qualifying for the prestigious Union public Services commission. After spending over 3 years in various administrative positions in DRDO, Air headquarters and NCC directorate, Nikita felt the urge to do something beyond and left the service to work for various NGOs. She spent some time at Save the children India and Sahas Sports foundation. It was while working on  a social project she  came across night schools accidentally. What she saw and heard compelled her to start Masoom in 2008 an organization focused on improving the night schools.
In 2006 Nikita initiated a participatory research project on Night Schools in Mumbai. The research was sponsored by Partners for Urban Knowledge Action and Research (PUKAR), an organisation that offers fellowships for young researchers to uproot socio-economic issues in Mumbai.
The report, “To Understand Educational Needs of Night School Students and Developing Methods to overcome them”, was completed in 2007.
The report concluded that night schools were failing to meet expectations and fulfill their potential. At the very least they demonstrated the need for improved resource and  infrastructure, such as; notebooks, textbooks, science lab material, a library, evening nutrition,  counseling service and career guidance.
The outcome of the research naturally led to the realization that action needed to be taken to improve the night school system. This led to the conception of Masoom.

Masoom was registered as a Charitable Trust on 14th January 2008.

Nikita has been awarded the ‘Chakra for Excellence   2009 ‘ The award was presented by ICONGO IN Delhi. She has also been awarded the Mahila Pratibha Sanmaan by Rajasthani Mahila Mandal and Gayatri Gyan Probodhini Manadal in 2010 on eve on the International women’s day. In 2011 she has been conferred with Moneylife foundation awards, the Mumbai  ,Mayors award on eve on the international womens day. She was also awarded the savitrbai-phule Fatima sheikh award by Shikshakbharti for her contribution to night schools.  In 2014, Masoom has got Rising Star Award co-sponsered by Star Foundation and GFC for its work in the field of Education. On 26th Jan 2020 – Awarded with ‘Varad’ Puraskar by Upnagar Shikshan Mandal for his contribution in the field of education. In January 2021, Nikita was selected as an Ashoka Fellow (Ashoka Fellowship) www.ashoka.org. It is an international fellowship.

Masoom is presently working in 85 night schools of Mumbai, Pune, Ahmednagar and Nagpur. Masoom plans to reach out to 170 night schools by 2022 impacting 20,000 night school students in Maharashtra.